skip to Main Content
Like my friend, Marci, author of the newly released, Lakeside Retreat, we share some common loves: time in nature, creativity and the joy of building character into kids. I am currently enjoying her new full color devotional and as a Nana with 5 (and soon to be 7) grands, this story captured in the devotional resonated with my heart– and I think it will inspire you as well:
Every house has a builder, but the one who built everything is God.

As I walked down the stairs of the deck toward the lake, I noticed a post filled with bent nails that were 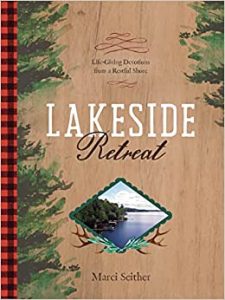 hammered in at different angles. It seemed out of place, so I asked Ginger about it, and she went on to share about the time they built the deck.

The rustic cabin had been one of several buildings the Weyerhaeuser Lumber company used in their logging camp across the lake. When they shut down operations in the early 1900s to relocate the business, many of the cabins were put on skids and slid to the other side of the frozen lake, where they were eventually sold.

As Grandma and Grandpa Swann’s family grew, so did the need for more room and function. Additions and upgrades became a continual effort. One of the biggest undertakings was adding a great room and large deck, complete with stairs for easy access to the lake and dock.

“Everyone joined in, whether strapping on a nail bag or making sure lunches were made for the hungry workers,” she explained. “Because Grandpa Cliff was such a connector of people, he never wanted anyone to feel left out. When my cousin Andrew asked to help, Grandpa went to his toolshed and brought out a small can of nails along with a small hammer, just right for Andrew’s small hand. He was assigned the very important task of putting – as many nails as he could in the six-by-six support at the edge of the deck.”

I smiled, now getting a better understanding of the post and its importance.

“Andrew stayed at the task for hours. While the rest of us cousins played at the water’s edge, he kept hammering. He pounded in those nails until his dad and uncles put their hammers down for the day. When Grandpa Cliff examined the nail-studded post, he told Andrew how great it looked.”

Grandpa Cliff knew that adding the nails didn’t affect the final product. The value was in the process. Long after summer tans faded and leaves changed colors, the nails were a reminder of something important—being connected.

Years and many more changes later, the deck still stands, including the nail-covered post. Isn’t that just like the Lord? He knows that as we “hammer” through the problems and challenges in our lives, we are building perseverance and determination. We might bend things or even blister our palms from the tools he puts in our hands, but he knows that what we’re building is bigger than what we might have planned or imagined.

Lord, thank you for the times you have me hammer things out so I can learn lessons I will need to rely on later in life.

Think about a time when you had to really think things through before tackling a bigger project. How did the process help reveal God’s bigger plan?

Marci Seither is the author of the new full color devotional, Lakeside Retreat. She has been married to her 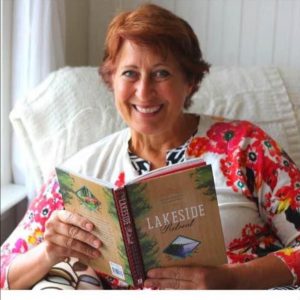 husband , John for more than 25 years and is mom to six children. Marci also enjoys time with family and friends at the lake, baking, sewing, and is a vocalist for a swing band.  Learn more about Marci.

What A Man Wants

At the time I (Bill) was writing 7 Simple Skills for Every Man, I had…

Resurrection Power! Overcoming Thru the Cross of Christ

When Life Disappoints You, What Can You Do?

When life disappoints you and expectations go unmet, what can you do? Where do you…